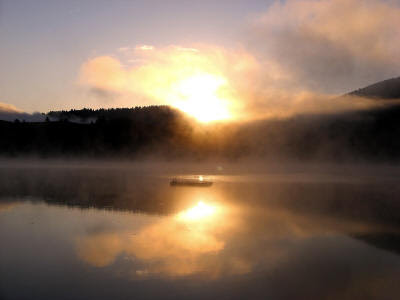 Traditionally we fulfill our obligations to family and friends with an annual or semi-annual visit this time of year. However, for folks who enjoy their peace and quiet (and lack of traffic), it can be a bit trying.

It's funny. It seems like most people talk about the 'beauty' of nature. Flowers. Birds. Wildlife. Wide Open Vistas. Majestic Mountains. Towering Pines. These are all part of life at Elk Lake Resort. And, I must admit I relish these delights to my eye. However, when we travel the thing I notice most is the noise.

The press of people and the noise their lives generate seems to permeate my pours. A few days into our trip I find myself feeling incredibly world-weary.

Although this happens to me twice a year, it always takes me a day or two to figure out what is bothering me. I seem to wander around in a daze, looking for something I cannot identify. Finally something 'clicks', and I have my answer.

Where on earth (outside of Elk Lake) does one find quiet, Elk Lake style? It isn't easy! I know. I've looked.

It isn't hard to find a nice motel room, a sunny poolside haven, a well-mixed cocktail. It isn't even hard to find a 'resort' with cabins on the lake. It is hard, however, it find the pure peace and quiet and relaxation which permeates my home.

In fact, in our travels, I am always amazed at how rare they are - these qualities I treasure; I crave. In fact, in all our wanderings this spring (and we have treked across a few roads never before explored by us), I've only come close a couple of times!

With the ongoing attack on ranchers, I wonder how long my usual 'sanity' spot will survive. Chicken lovers. Wolf lovers. Subdivision lovers. They are all taking their toll. However, to date, I'm thankful to say, it remains.

Where? At the back edge of a friend's ranch in the still somewhat remote and wild Wallowa Valley. Long live the rancher! Without these large chunks of land far from the press of the crowd, I think this is one lady who would quietly (or not) go insane before she could make it back to Elk Lake Resort!

Posted by Lady of the Lake at 1:29 PM No comments: 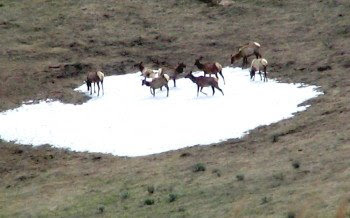 Tracking Animals In The Snow

This time of year we anxiously watch the snow, but with a completely different goal from a couple months ago. We aren't concerned with a good snow pack. We're hoping to see some bare ground, some green sprouts, a little less ice and snow.

This year it is slow to come. To date this spring has produced no 'double-drip' days. Elizabeth Laden, editor of the Island Park News, introduced me to this phrase. As she explained it, a 'double-drip' day is an early spring day with above freezing temperatures not only during the day, but also at night. In other words - snow melt day and night.

To say spring seems slow in coming seems a bit of an understatement this time of year. We have our projects. We're anxious to get started. And, we can't even get to the resort! However, that, too, will change. We're just starting to wonder, when?

All this talk about snow reminds me of a new winter pastime. Last winter a good friend gave us a book titled, "Tracking Animals In The Snow". This little guidebook by Louise R. Forrest sparked a new interest.

This winter, whether snowmobiling or cross-country skiing or snowshoeing, I found myself paying attention to indentations left behind by earlier travelers.

Around the lodge it was common to see fox tracks - no surprise as the fox came for several visits. However, bird tracks (usually Sage Grouse), coyote tracks, rabbit tracks, chipmunk tracks, wolf tracks, moose tracks, cougar tracks - these and a few I couldn't identify were seen on our treks, many of them we saw repeatedly.

Not only were the tracks reminders of the various hardy animals and birds who withstood the wind, snow, and bitter cold without the comfort of four walls and a roof, but the tracks, themselves, were often transformed by the wind into unique miniature snow sculptures.

A few times I found fox or coyote tracks the wind had transformed into almost perfect 'inverted' tracks. Other times I found tracks which looked like they were made by an alien creature. Spikes. Elongated grooves. Odd shapes. A simple animal track changed into a alien minature snow-formation.

I'm not sure which I found more fascinating, but today - well, in all honesty - I'd like to find no snow for tracks! I LOVE winter at Elk Lake, but it seems like time!

Maybe it was reading last year's journal. In early April last year we were counting animal and bird sightings as we walked (not skied) and drove (not snowmobiled) around the valley. In fact, last year in less than a month from today, we were taking our first ATV ride into the hills to view and count the returning elk. It ain't happenin' around here this year!

That's good! Last year was dry! But, this girl's got spring fever!

Posted by Lady of the Lake at 5:34 PM No comments: 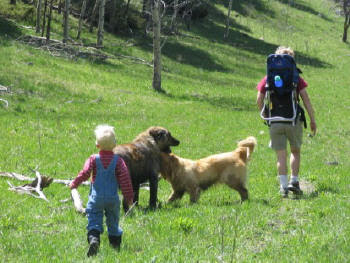 Things I've Learned From My Children

For over half of my life my children have filled my days (and nights) with their presence. From infants in arms to active growing boys and girls to rebellious teeneagers to 20 somethings who 'hopefully' are beginning to see an increase in my IQ - life as seen us both grow.

Over the years we've laughed together, cried together, celebrated and played and argued, but, thankfully, always together! Today, as I look at my youngest learning and growing and still 'fun' and at a stage where Mom and Dad still have a 'brain' (and are still on his list of friends), I'm recognizing more and more how much I've learned from my children.

As parents, we spend most of our time 'teaching' our children. However, looking back, I can see how much they've taught me. A few things I’ve learned from them include:

Posted by Lady of the Lake at 1:37 PM No comments: