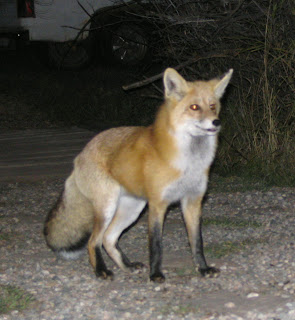 For some folks, I suppose life in the Centennial would contain a steady stream of unexpected events. After all, living this far off the beaten path is unique. It is full of things you just don't see every day in the 'real' world. However, after seven years, few things surprise us too much. Even those typically occuring events often provide a 'twist; on the norm.

The other night, however, offered a first - a first for us and, I suspect, something quite unusual, even for those living on the back side of nowhere. We were lying in bed. The house was quiet and, while the lights were on in our bedrooms, we were all reading quietly - kinda lost in the world's of our books. But - - - a noise on our roof brought us slamming back into the real world. What was THAT!?!

It sounded like something trotting across the roof. WHAT - THE ROOF! What on earth could be on the roof? It sounded larger than a rodent and smaller than Bo. It moved quickly and confidently, but with the definite sound of footsteps.

While it was not frightening (after all, we were safe inside), it was very odd - and, like all good pioneers, curiosity was our primary emotion. Since the footsteps had ceased to patter on the roof, we figured whatever had gone up, had come down. So, hubby grabbed the flashlight and shined it out the windows. Sure enough, there they were - footprints in the snow.

Obviously, however, our nocturnal visitor had fled the scene. Thus we waited for morning light to examine the evidence. 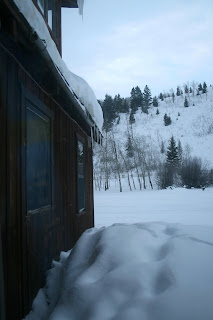 The next morning - there they were, clear as day. Fox tracks leading up to the side of the lodge, coming to an end, only to begin again a good eight feet up on the roof. Now I knew those little critters were light on their feet. I knew they were catty. I knew they were fast. But I did NOT know a fox could make an eight foot vertical jump. Well - maybe they all can't but this one sure could! 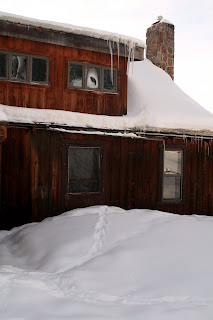 If you look closely you can see where he jumped from the snow pile outside the door to just below the bedroom window. From there his tracks wind up beside the wall and onto the main part of the roof. 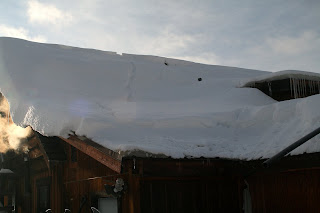 From the other side you can see where he worked his way up to the peak, across the top, and then down the other side to a valley where he jumped the four feet or so to the ground.

So, the only question remaining is: WHY? Why on earth would a fox choose to jump up on the roof, work his way across the top, and then drop down the other side - only to end up in a spot merely a few feet from where he started? Do fox get bored? Did he want a more expansive view? Just curious? Of course we will never know - but we will never forget either.

So closes another 'normal' day in our lives at Elk Lake!