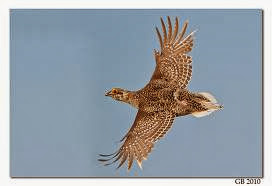 I commonly run across Ruffed and/or Blue Grouse on my summer hikes around Elk Lake. Occasionally I'll even stumble across one in the winter. While interesting birds, these sub-types seem the epitomy of their species - a bit dumb, a but clumsy, a bit 'obvious'.

Completely unlike their cousins - the Sharptailed Grouse. I only see Sharptailed Grouse in the winter (although according to the habitat maps they summer in our area). Furthermore, these birds are so un-grouse-like in their actions, I would not have assumed them to be in the same family. They appear smart. They are quick and graceful. And, they are extremely flighty! Thus I have not ONE decent photo after 10 years! 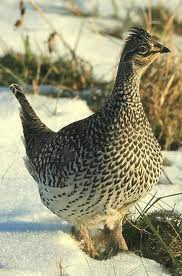 Thankfully others have had greater success! Thus, ALL the bird images in this post are courtesy of others. Since my posts are always directed by my photos and experience, you may be wondering, what's my point? Why a post on Sharptailed Grouse if I have no photos of the birds?

I actually have a really good answer for that question: I had a Sharptailed Grouse 'experience'! And, I have a few photos to prove it! No birds - although I saw and heard them (that is something else unique to Sharptailed Grouse - in my experience they have always been more vocal than their dimmer witted cousins).

So, the story goes like this: I was snowshoeing on a bitterly cold afternoon soon after our lastest good snowfall. This, of course, means I was working my butt off (to be honest, 'that' is a real good reason to snowshoe!). I had worked my way through an open meadow and into a stand of heavier timber when, suddenly, from all sides sprang up at least a dozen Sharptailed Grouse.

Now, stumbling across them on a snowshoe trek is not unusual. Seeing a few together is also not unusual. But these birds were not only in heavy timber (which I had never seen before), but I found what they left behind to be incredibly interesting and educational. So. . .that is what this post shares. 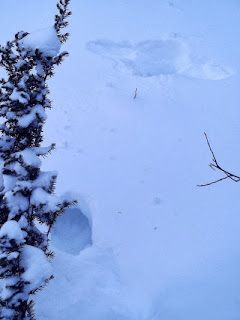 Once the birds had completed their hasty exit, I started looking for clues as to 'what' they had been doing. They had, as far as I could tell, all flown from ground level. This might be moderately heavy timber, but there was still a LOT of fresly fallen (i.e. deep and powdery) snow. Furthermore, it was COLD (-15 at that moment). My first thought: some special food source nearby. I certainly did NOT expect what I found for my first clue: a hole! 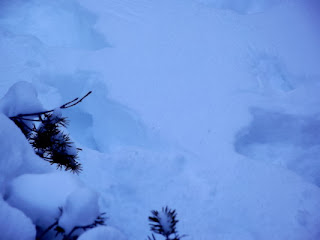 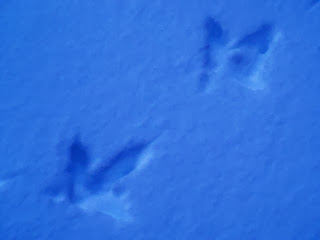 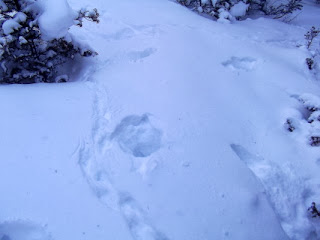 The holes were all over - and they weren't really holes, they were tunnels! Yet, foot tracks on top of the snow proved the birds were not 'sinking' into the snow (thus, tunneling until they could reach the top again). Furthermore, not one of the tunnels reached bare ground - so they were not tunneling for food. And, based on the tunnels' width, the birds appeared to have merely 'walked' into them (not extra wide as if they used their wings to push themselves through the snow). And, the final clue - no signs, anywhere, of these tunnels having been created by anything but the birds! 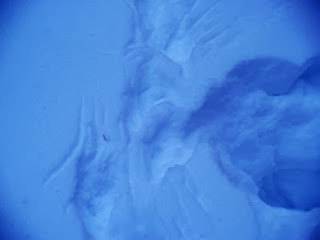 In fact, as this last photo shows, it appears the bird took flight 'at the tunnel's mouth' - in other words, it came out of the tunnel and flew. Therefore, it had been IN the tunnel when I came into the vicinity. This would explain why I was able to get so close (being in their tunnels, they couldn't hear me until I was nearby). But, it still did not explain the tunnels created by a bird!

Always curious, I couldn't leave it alone. WHAT on earth were these birds doing? WHY? Why had I never found this kind of thing before (after all, even with the birds, the tunnels would remain for awhile)? So, I did what every average American does today when looking for answers: I Googled it! And. . .I found an answer. But, first, a little about these interesting game birds. Sharptailed Grouse are found in many North American prairies seeming to prefer savannnah type grasslands with scattered shrubs. These birds, like the Sage Grouse, are known for lekking (dancing) displays during mating season. The photo above shows a male distributing some of these dance moves.

Mature birds weigh between 1 3/4 and 2 1/2 pounds. The males have a distinctive yellow 'comb' over their eyes and a violet display patch on their neck (see above). The females are smaller with regular horizontal feather markings and no yellow comb or purple display spot. Okay - so now I knew what they looked like (although I'd already seen them several times in flight). Now, however, my suspicions were confirmed. I had seen Sharptailed Grouse. But. . .my questions remained unanswered.

On to the next possible clue: what do they eat? Apparently they are ground feeders in the summer and tree feeders in the winter (seeds, berries, buds, insects, etc). That, too, confirmed what I had seen for, prior to this experience, I had always seen these birds in trees. But, it did not explain their presence 'here', nor the snow tunnels they had created.

It took a couple of tries before I found a website which provided answers. According to Wikipedia, Hamerstrom and Hamerstrom (1951) and Gratson (1988) discovered that "as the snow depth increases, habitat selection shifts from cropland and prairie to shelterbetls and woody vegetation." So now I knew why they were in the trees. Yet the next sentence contained my 'real' answer. "One habitat change seen. . .was grouse would select large snow banks to burrow into, to keep warm during cold nights."

It wasn't night - but it WAS cold. Thus, obviously, these birds had moved into the trees for shelter and burrowed (tunneled) into the deep fluffy snow for warmth. Hmmm! Now I felt really guilty for driving them back out into the cold. Thankfully, that day, there were lots of trees filled with fluffy piles of snow in which they could relocate!

And you thought winter at Elk Lake was boring!

Posted by Lady of the Lake at 1:17 PM No comments: 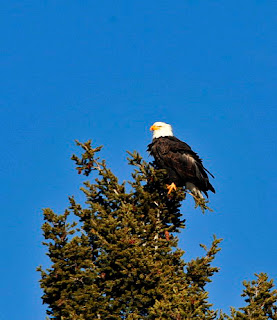 Bald Eagles, Golden Eagles, Fish Hawks (Ospreys), Red Tail Hawks, Northern Harriers, Swainsons Hawks, Great Grey Owls, Great Horned Owls, Burrowing Owls - Just about any raptor found in the Northwest can be found in the Centennial Valley. For this reason, many consider the valley to be the best place to view raptors in the lower 48. Certainly at Elk Lake we enjoy many visits from various beautiful large winged friends.

By late fall, many have moved to better hunting grounds. Not so the eagle pair who nest nearby. While we rarely see their fledglings this late in the season, the parents can be spotted perched atop tall trees or riding the wind current above the lake.

This year, however, the ice came early. An ice drill and a warm constitution are all the extra winter gear needed by human ice fishermen. Lacking these accoutrements, the eagle must leave or find another food source.

This particular pair seemed to have no problem taking the second option. One day they were dining of fish and muskrat, the next they were feeding on their cousins - feathered fowl. 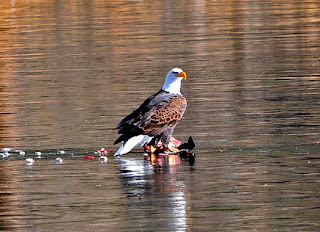 It just so happened we caught a Bald Eagle and a Western Grebe on the freshly formed lake ice late one morning. At that point the Grebe was still very much alive. The eagle was hovering over it. Based on the distance to the nearest open water and the birds' actions, we assumed the eagle had frightened some ducks into flight (we have seen them do this numerous times by swooping low over a group of waterfowl) then taken this one out in the air.

This is certainly possible because nearly 28% of an eagle's diet can consist of birds (more on that to come) - and 7-8 % of the birds consumed are waterfowl. However, when you consider an adult grebe weighs in at about 30% of a Bald Eagle's weight, that is still amazing (until you realize Bald Eagles have been known to take GEESE)! 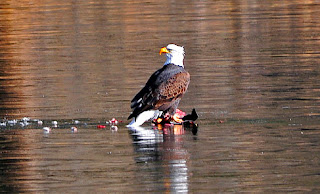 Unfortunately I did not have my big lens with me. So, we hurried back to the house, grabbed the lens, and returned to watch the action.

By the time we returned, the deed was done - the grebe was feeling no pain, and the eagle was enjoying his dinner. However, the action had moved a few hundred yards north which made it clear the Mr. Eagle had 'carried' the grebe (in flight) at least this far. 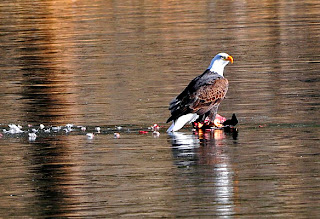 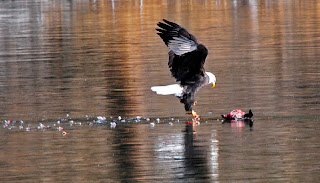 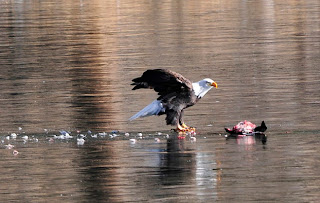 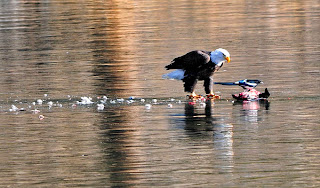 Always an opportunist, a bold Magpie, who had obviously been watching the action from a safe distance, invited himself to dinner. The next few shots catch their interaction! 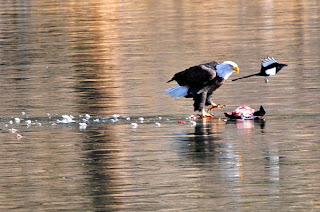 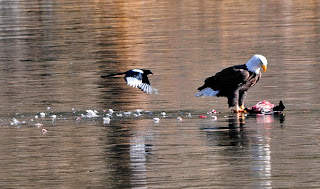 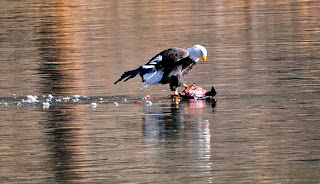 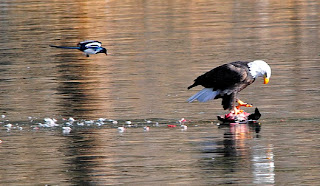 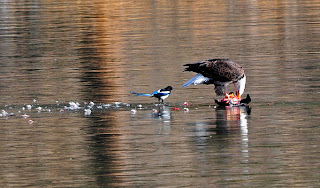 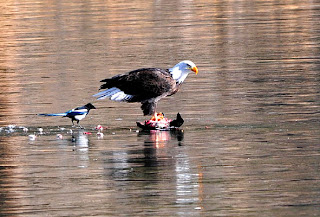 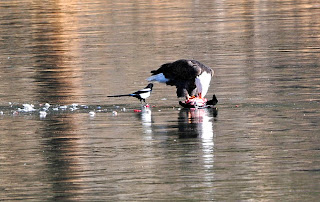 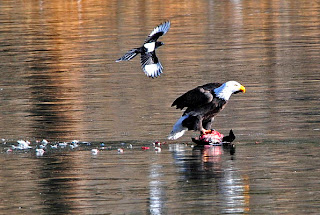 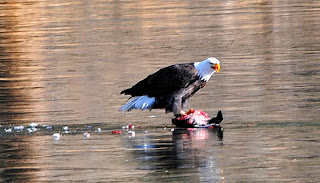 After harassing the Mr. Eagle awhile, the Magpie decided a little caution might be the wisest course of action. So, as the eagle screamed his resentment, the Magpie flew to yonder tree to await the scraps.

Now for the punchline: A couple days later, I spotted a dark spot on the ice out in the bay. With the help of binoculars I could identify it was likely another dead duck - with an eagle perched on top. Thus this story had the same players - dead duck, feeding eagle, and pesky Magpies (I could see two hanging around not far from the eagle), but it had a TOTALLY different ending!

As I watched, a Magpie boldly landed a few feet behind the feeding eagle and began looking for scraps. Okay, repeat of a few days ago, I'm thinking. NOT! For, as I watched, suddenly a second eagle appears on the scene, snatches (and kills) the Magpie, then lands to consume her appetizer while awaiting lunch!