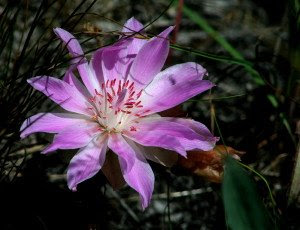 That certainly is not a typical mid-July title. I guess that is why, while I am going to have to make this a 'quick' post due to time constraints, I chose this subject over the numerous other things I want to share with you.

Just to keep you coming back (okay, I'll admit it is to remind me too), I could have posted on the increased bear sightings (reminscent of last year), the interesting conclusion to my otter odyssey, or the new places I've managed to explore on longer hikes. However, I feel compelled to talk about the wonderful green carpet surrounding us this year.

Last year, by the end of June, we were finished with the mowing. The grass had virtually stopped growing and everything was turning brown - which is typical for that time of year (even following a wonderfully good snow year). This year, however, we are in the middle of July and still mowing. In fact, I'm praying we have to keep mowing for at least another month.

Why this sudden love of mowing? Well, I do enjoy the excuse to get outside (when I have time to help mow), but my primary reason is the abundant grass everywhere I hike. In fact, I was especially glad to see the cattle return (although I'm not sure they are making much of a dent in the green stuff) in hopes they would help reduce our "growing" fuel problem.

It seems we are permanently stuck in early June weather. Although the thermometer has topped 80 degrees a couple of times, most hot days have been in the mid to upper 70's. We have had sub-freezing temperatures - even in July. And, we have only experienced a couple handful of days (since the first of June) when we didn't get at least a sprinkling of rain.

The regular thunderstorms have added variety to our weather - along with some spectacular light displays and impressive sound effects! Thankfully, nearly every storm has been accompanied by rain - sometimes substantial rain.

So, the hills are carpeted with green and punctuated with various and profuse wildflowers. In fact, I have never seen more Bitterroots. And, I've photographed several 'new to me' species of wildflowers (which, hopefully, I will identify for us both as the season begins to slow down).

So, with spectacular rainbows, grass up to my waist, and wildflowers coloring every meadow and even the forest floors, it is a particularly fruitful and colorful summer here at Elk Lake.

Posted by Lady of the Lake at 2:16 PM No comments:

Email ThisBlogThis!Share to TwitterShare to FacebookShare to Pinterest
Labels: bitterroot, green grass in July, rain in July, wetter than normal weather in Montana 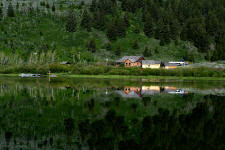 Morning On The Lake

I HAD to share my morning on the lake with you. It was too magical not to do so. In fact, it was one of those mornings when I wish time would stand still - at least for a while - and let me stay suspended in another reality for just a little longer.

I have not done much kayaking this summer. For one, the weather has been too forbidding. For two, the wind has been too frequent. However, today the early morning sun's rays were causing wisps of fog to hover and rise from the lake's glassy surface. Talk about an invitation to come visit! So I did - and am I ever glad I did!

Hiking is my first love. Probably, at least as long as I can walk with ease, it will remain in first place. However, kayaking is a wonderful way to experience nature - and, at the right time of day, if you are sufficiently quiet and unobtrusive, it can be a particularly fine way to view wildlife. This morning was a perfect example.

It was a cold morning so I delayed - waiting for the sun to crest the ridgeline and bathe the lake's surface in a golden near-blinding light. Still it was only 33 degrees when I headed for the boat house.

I had barely begun to break the lake's glassy surface with my paddle when the first of the morning's treasures came into view. A pair of herons stood still as statues on the nearby bank soaking up the early morning sun's warmth. 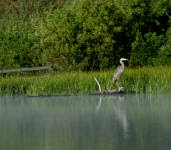 Heading straight across the lake from the boat house, I hugged the far shore watching for ducks and shore birds and hoping to glimpse some larger game. I had just passed the little cove at the base of the draw leading up to Elk Mountain when I heard an odd grumbling and clicking behind me. Sandhill Cranes are one of my favorite birds. Thus I am familiar with several of their sounds and suspected I might be hearing their voices. Sure enough, a pair of Sandhills were right along the shoreline just behind me.

When one sees a pair of Sandhills and, when you they have sighted you, and when this combination does not send them scurrying away but, instead, they remain close-by, nearly silent (except for the growling/grinding/clicking sound), it is a very good indication there is a chick or so nearby.

Suspecting this to be the case, I slowly and carefully stopped and turned so I could see them more clearly. One Sandhill, I suspect the male, paced back and forth in an agitated manner (I knew why but was loathe to leave before taking a hard look into the nearby grasses). He paused from time to time to throw a billful of grass into the air. The other bird, I suspect the female,, continued to emit the odd sounds and move very slowly away. Soon a little orange head could be seen just above the grass tops. After a brief photo shoot, I paddled quietly away to avoid disturbing my first Sandhill chick of the season. Wow! What a thrill! 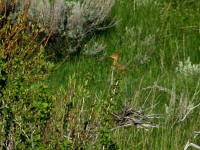 Little did I know more treats were in store. A bit further down the lake I quietly paddled toward the foot of Limestone Canyon. Thicker fog hung near the water's edge along the cool canyon floor. Peering and listening, I drifted along, hoping to see something through the fog. Sure enough. Like an erie specter something dark and glistening caught my eye. Shrouded by fog, I couldn't make it out. Driven by curiosity, I had to get closer.

Now, I have a confession to make. I enjoy most wildlife. In fact, I revel in learning about and observing nearly every wild plant and animal which lives in my neighborhood. However, there are a few, very few, critters which I do not care for. No, I'm not talking about skunks although I really prefer to view them from a distance. My two least favorite critters are birds - the cow bird and the Cormorant. Granted I am sure both play an important role, but neither inspires me in the least. Until this morning!

Drifting silently along, I could finally make out the shape through the fog. It was, actually, several shapes. Several Cormorants were perched on a partially submerged log soaking up the early morning rays. While these birds are typically quite flighty, thanks to the morning mist, I was able to get quite close before they all flew away. 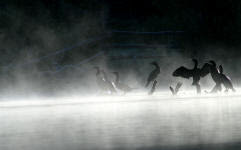 The canyon floor yielded another sighting of a pair of Sandhill Cranes, unusually silent. However, with less light and taller grass, I knew there was little to no chance of spotting a chick - if one were around. Thus I paddled on by.

Birds! Ah, the pleasure of living on a lake. Not only can I enjoy the land birds, the water birds add to the variety. However, as much as I enjoy seeing the birds, with the exception of spotting babies, larger wildlife sightings are still a bigger thrill. Many days on the lake, however, larger game are no where to be seen. Not so this morning. In fact, it was the Buck's Day!

As I continued past Limestone Canyon, the fog began to thicken. The sun had yet to fully crest the nearby hills, and it was cool and still in the heavier shadows along the eastern shore. Paddling quietly along, I paused to listen. Smaller birds twittering in the trees. An owl soft 'hoot' drifting through the mist. A soft splashing nearby. What was that?

I suspect that is exactly what he was saying as he peared around the fallen tree. Two buck deer had come to water. Little did they know a trespasser was nearby. Of course, as I glided closer, they decided to cut their risks and bounded up the hill.

However, in spite of their inborn caution, at their heart I believe Mule Deer are curious. Thus I had another opportunity to get a closer look as I drifted below them just a little farther up the lake.

The fog grew thicker as I headed north. In fact, except along the shoreline, it was almost impossible to see. The thickening mist, heavy shadows, and utter stillness created an almost other-worldly feel. In fact, as I headed across the lake in heavy fog - looking to reach the sun-bathed shore and thaw my chilled fingers - I could see nothing but the prow of my kayak and the surface of the water around me. It was easy to imagine how someone could lose their bearings in similar conditions. 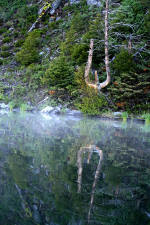 A few more delights were waiting as I began to pop out of the fog. Three different duck species swam nearby. An osprey screamed overhead. A bald eagle flew past then swung to the far shore to chase another bird (osprey?) from a favorite perch. Then from behind I heard a familiar trumpeting sound. Sure enough, a pair of Trumpeter Swans were quickly approaching from the rear. 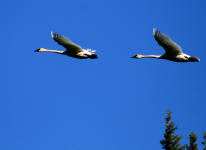 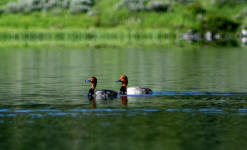 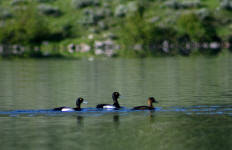 Last, but by no means least, was the little buck who tiptoed above me near the point of the bay. He saw me, but didn't know what to think of that 'thing' floating on the water under his nose. Cautious animal that he was, he angled slightly up and away from me, but curiousity drove him to keep stopping and looking. To my delight he set himself up for a perfect photo shoot! 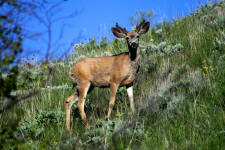 Rounding the bay's point I relished the resort's reflection on the still-calm waters. This combined with the softly putting fishing boat near the far shore brought me gently back to reality. 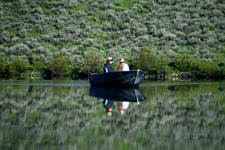 Some days I just can't imagine why everyone wouldn't give their eye teeth to be the,

Posted by Lady of the Lake at 3:47 PM No comments: