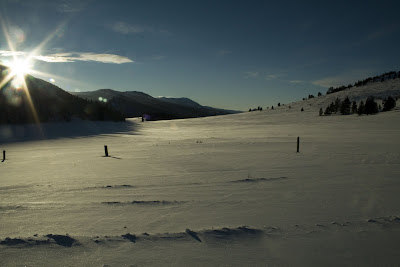 The Season Winds Down

It is starting to feel like spring in the Centennial. Several recent ski excursions have left me thinking it was time to trade in my skies for hiking boots. Of course there is still too much snow to do so - thankfully - but it is definitely starting to smell and fell like spring.

I've noticed a few more little birds returning. There are spots on the road to Hidden Lake which are starting to go bare. The Narrows (on the lake) is starting to slush up. The snow (yep, we're still getting snow which is a good thing) is getting wet and sticky. All signs of spring.

In fact, sitting in front of the window in the sunshine makes me almost hot! However, we are still having snowmobilers visit each day. We are grateful!

Another week and a half, however, and we'll be heading out for a brief break before heading back to get ready for our summer season. I'm already looking forward to seeing the big game return.

Moose sightings are up and wolf sightings are down. This is a good thing. We had an old moose die up the road lately. We haven't been over there, however, to see if the wolves found him. I suspecting not since the other moose seem to be moving around more freely these days.

The weather is warming, the sun is shining, a bit of snow is falling, and I am so thankful to be the 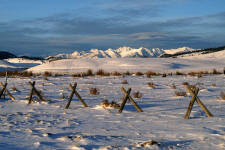 What a fun word: 'miscellany'. I ran across it lately. Although I wouldn't call myself a collector of words, exactly, I do find them intriguing. This one fits today's post perfectly because it means, 'a collection of a variety of sorts of things'. Today's post is a collection of sorts!

A wolf update: Since my last post I have seen wolf signs twice, but always at least a half mile or more from the resort. This is quite comforting. Furthermore, a recent conversation with our 'neighbors' at the Refuge Headquarters revealed only one wolf sighting in their area. Of course we know where they were hanging out!

A moose update: I have mentioned in other blogs the lack of moose sightings this year as compared to previous winters. In addition we have seen only two 'this year's calves'. I discussed this with the refuge biologist as well. He said the last few years cow-calf ratios have been dropping. However, the overall numbers are still good with 127 being counted this winter.

A business update: Last week I explained my delay in writing was due, in part, to a busier than normal week. In face of YNP numbers dropping 16% overall (21% from the West gate) in January, we are extremely thankful for steady business this winter. We had a really good week, and we had an extremely busy day.

Every winter it seems we get one day when everyone and their cousin (I'd say 'dog', but the dogs don't drive too well) show up on the same day at about the same time. It was standing room only (literally) throughout the lodge from about 1 pm to 3 pm yesterday. We served 64 lunches (just the three of us - with the youngun' even chipping in where he could) and had 19 more who couldn't stay until we could get them seated and served. What a zoo, but we are thankful!

The birds are returning. While winter is howling (literally) outside my window today, Narrows Creek is starting to break free from its snowy bonds. As the water surface clears, it appears to be attracting some new visitors. In fact, a few days ago as I was skiing along, some sort of a sandpiper flew out from under a snowledge overhanging the creek. While I have tried to identify my early visitor, I cannot. None of the species are supposed to be here yet!

The snow conditions: As is typical, the Centennial Mountains have hogged much of the snow again this winter. While Island Park cannot boast of great snow, our snow pack has remained purely as simply due to our cool temperatures. Generally we have enjoyed beautiful days, even when the other side of the mountain was socked in. However, today we are gaining a little more snow - and, for those who are willing to trek a bit further back into the hills, there are still some really nice pockets of untouched powder to be found.

As might be suspected, seeing the bird this time of year was a treat. While we've seen wolves and moose and sharp-tail grouse and chickadees and coyotes and an occassional fox, we don't see too many critters in the winter. Thus I get my kicks out of identifying the scat and tracks I see. It is really quite amazing how revealing these little things can be.

Take the squirrel tracks which turned into a squirrel interstate over a few days time. I never saw the little animals leaving the tracks, but that was either one EXTREMELY busy squirrel or a squirrel family. I suspect there was a winter stash on one side of my ski trail, with the living quarters being on the other side.

The other funny thing I've noticed lately is how cocky the local fox are. Not only do they seem to take pleasure in walking past the dog's kennel just outside the fence, they also mark their regular trails quite liberally and frequently. And, as it so happens, my ski trail up Narrow's Creek must follow one of their regular winter routes. So, one day I found three scat piles in my ski tracks! What, do you suppose that meant? I kinda figure that fox was just telling me (and the dogs) who really owned that strip of land. Life is never dull when one gets to be the

Posted by Lady of the Lake at 4:10 PM No comments: