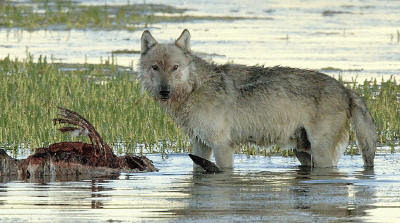 Love Me! Love Me Not!

I hit a deer the other day. Only the second in many, many years of driving. It still haunts me.

Call me soft. I hate to see something suffer. Hate to see things die. Worse yet to be the cause.

So, all the hubbub about wolf de-listing has me wondering. Why do some people put one animal's value above another? Why are wolves worth more than deer?

Should you argue, they aren't, let me beg to differ. We have over 1,500 known wolves in Montana, Idaho, and Wyoming. While that may not seem like much, consider how many deer, elk, moose, pronghorn, etc. it takes to feed that many hungry animals. Considering an average wolf outweighs even our largest dog breeds, that's a lot of meat.

Of course, it doesn't stop there. Say only one-third of these animals mate this year. We're talking 500 breeding pairs. That means 250 litters. Say each litter produces five viable pups. That's 1,250 MORE wolves by the end of 2008.

Figure in natural mortality at a generous half, we're still talking over 2,000 wolves in the tri-state area by the end of 2008! That's a lot of hungry mouths to feed!

Looking at the Bison issue in Yellowstone this winter, one can anticipate the future. Although I can't imagine anything cuter than a Bison calf (okay, I'm a sucker for a cute face), I can't imagine a more painful way to die than starvation. So, it makes me wonder, why would someone prefer to see an animal starve due to over-population than see them put humanely out of their misery? Again, the equation just doesn't make sense to me.

Back to the deer I hit. That doe had as much chance against my car as she would against a pack of wolves. The panic in her eyes was no less real because her attacker was steel and fiberglass. And, while we're on the subject, why aren't environmentalists parking their cars to show us their empathy for the hundreds of thousands of animals killed annually on our roadways?

But, I digress. While many surrounding areas are seeing moose numbers drop, the Centennial Valley had a decent population going into winter. In spite of a dryer than normal summer, I observed a cow with twins. A rare sight. Sadly, along with many other calves, I don't think they survived the winter.

Why? Wolves! A pack (or maybe two groups) spent quite a bit of the winter feasting on moose and elk here in the valley. Where are the mourners? The protestors? The lawsuit to protect the prey?

A wolf or two or even three aren't too bad. They kill an animal here and there. They tend to take down the weak and injured (someone said that was all any wolf did). Get six to eight hungry animals and dinner time takes on the look of wholesale slaughter. Where is the justice in that? For that matter, where did we get the idea there was 'justice' to be found?

Why are judges not scientists the final say in what is best for the environment? I can't imagine seeking help from a wildlife biologist when faced with a lawsuit. Why do we let the judicial system decide the fate of our wildlife? What kind of mixed up mess is that?

Emotionalism. Legaleze. Words. These define policy. With no moorings, no clear standard of right and wrong, no final authority, anything goes! That's why groups can 'sue' over wolf de-listing. That's why emotional 'words' elicit such a wholesale (and, it appears to me largely unthoughtout) response.

Take a recent posting on Ralph Maughan's blog. Although I've found many interesting and enlightening wildlife-related articles on this blog, his recent posting (complete with photos) on wolves killed not long ago in Wyoming is reflects the emotional sensationalism and one-sided viewpoint so prevelant these days.

Words like, "Warning. . .the photos might disturb you" imply something unusually aweful. The photos are sad. No doubt. Any dead animal is a sad sight. In a perfect world obviously everything (and everyone) would live in peace. News Flash: This isn't a perfect world! So, where's the picture of a buffalo walking on its own intestines which are being pulled from the gash in its gut - put there by a wolf? What about the cow moose still haunting a kill sight and sporting a large rip in her rump, most likely from the wolves which killed her calf? Or, the dozens of dead (and uneaten) sheep, the leavings from a killing frenzy?

Mr. Maughan credits the anti-wolf folks with seeing the issue as an "almost entirely cultural resentment and conflict." I differ. I love seeing wolves. I love hearing them. They are wild. They are beautiful. They are deadly! I think it's when people forget the balance, that they become part of the problem, not the solution. A LOT of wolves is a problem. Scientists recognize this. Will the judicial system?

Scientists have determined we have a lot of wolves. Montana wildlife biologists support wolf de-listing. But, according to some environmental groups, wildlife biologists aren't qualified to make this determination. The judicial system is the current expert. That's what they are telling us (as I mentioned in most posting entitled Rex Lex.

No one said it would be easy. No one said we'd all get along. Obviously this isn't a perfect world. But, I'm home - back at Elk Lake - and that's about a perfect as it gets! (Photo courtesy of Gary Pumplin)

citing Montana biologists as credible to determine the administration of federal law, the determination as to whether the FWS has fulfilled its obligation under federal law (Endangered Species Act) is typical. Perhaps these biologists are competent to manage wolves according to state law, perhaps the state of Montana is capable of maintaining objectivity in its management (belied by many examples of extreme Livestock industry incursion w/ regard to wildlife management), perhaps these things are true - that does not make them competent to interpret federal law, which is what the lawsuits are about. The FWS must approve all three state management plans (WY, ID, & MT). Perhaps you could enlighten your readership as to whether the other states, even if MT is granted, have demonstrated competency, political ability, and adequate enforcement mechanisms to protect wolves as is prescribed by federal law before delisting can take place ? That's one of the standards at issue. There are others at issue.

It is easy to cast aside the public's obligation/opportunity of oversight and legal remedy over federal action as 'frivolous lawsuits' - we see an increasing willingness to do so - but this lack of consideration for the rule of law, a comprehensive understanding of what is at stake/at question, etc. is troubling. "It seems to me that the lawsuits are emotional" is not a thoughtful condemnation.

I would encourage you to read up on the issue.

p.s. - the bison are starving because they are being prevented from roaming out of the park to placate the livestock industry. i would encourage you to read up on this issue as well. you can start by visiting the buffalo field campaign's website.