The story of the grill.

February 5, 2015…41* and overcast
We just got done with the sprint of lunches and Jake is outside burning the mountain of garbage that somehow accumulates in a very short time.  We try to recycle and compost as much as possible, but during the winter the Waste Management place is not open on Tuesdays, the day Jake goes to West to meet the Sysco truck.  To avoid huge piles of garbage stacked around the place (and wouldn’t the winter critters love that!), we crush cans, put bags of “trash” in the two bear boxes we have outside, and burn everything else…including compost.  Hey, if you build a big enough fire, it’ll even melt glass…right? 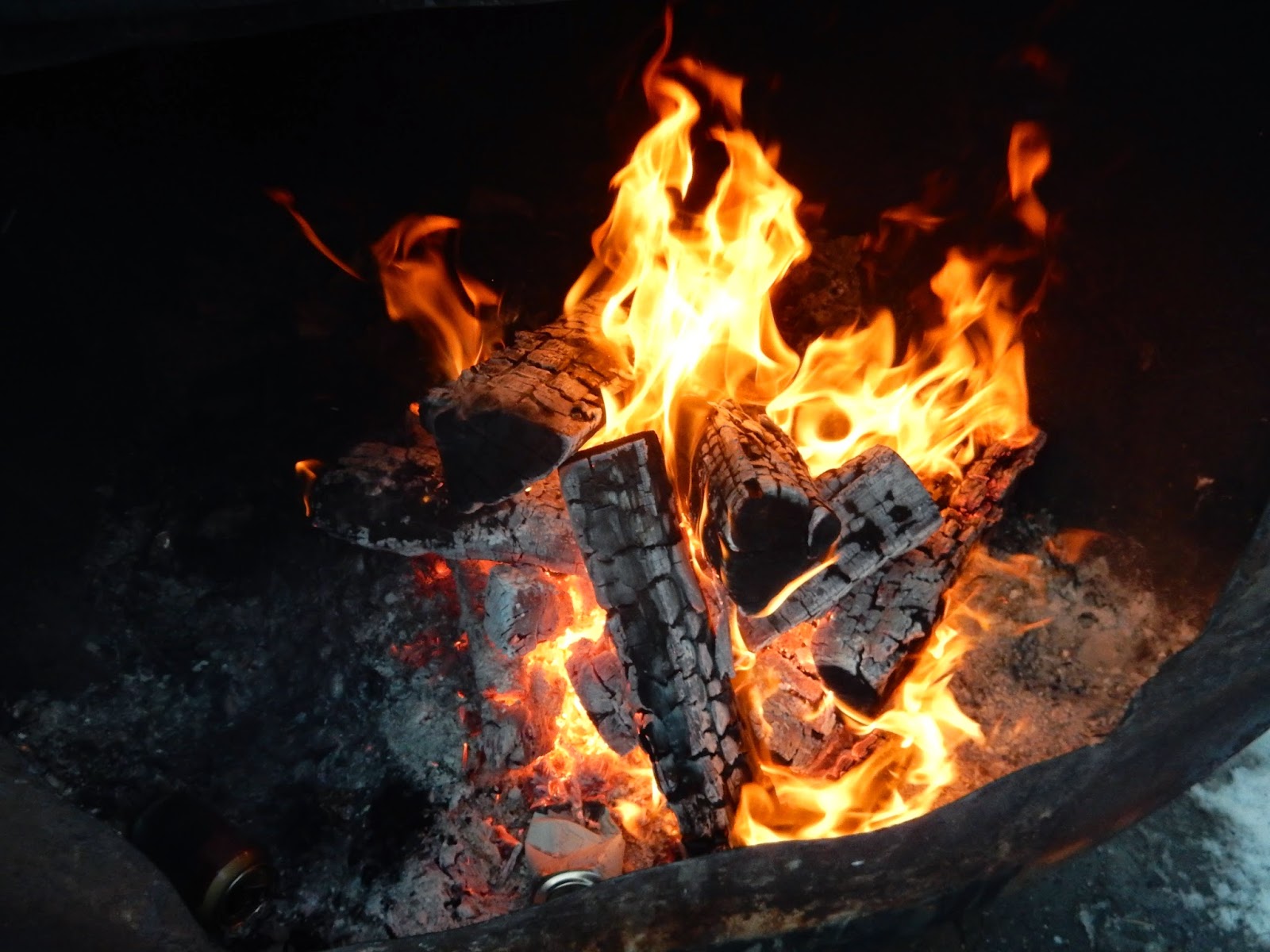 This week seems to be about wildlife, as much as anything else.  We have been regularly seeing moose on the hillside and down in the aspens; those who follow my paparazzi-esque picture posting on Facebook have seen these pictures.  Jake and I have been intrigued by how white their hind legs get. 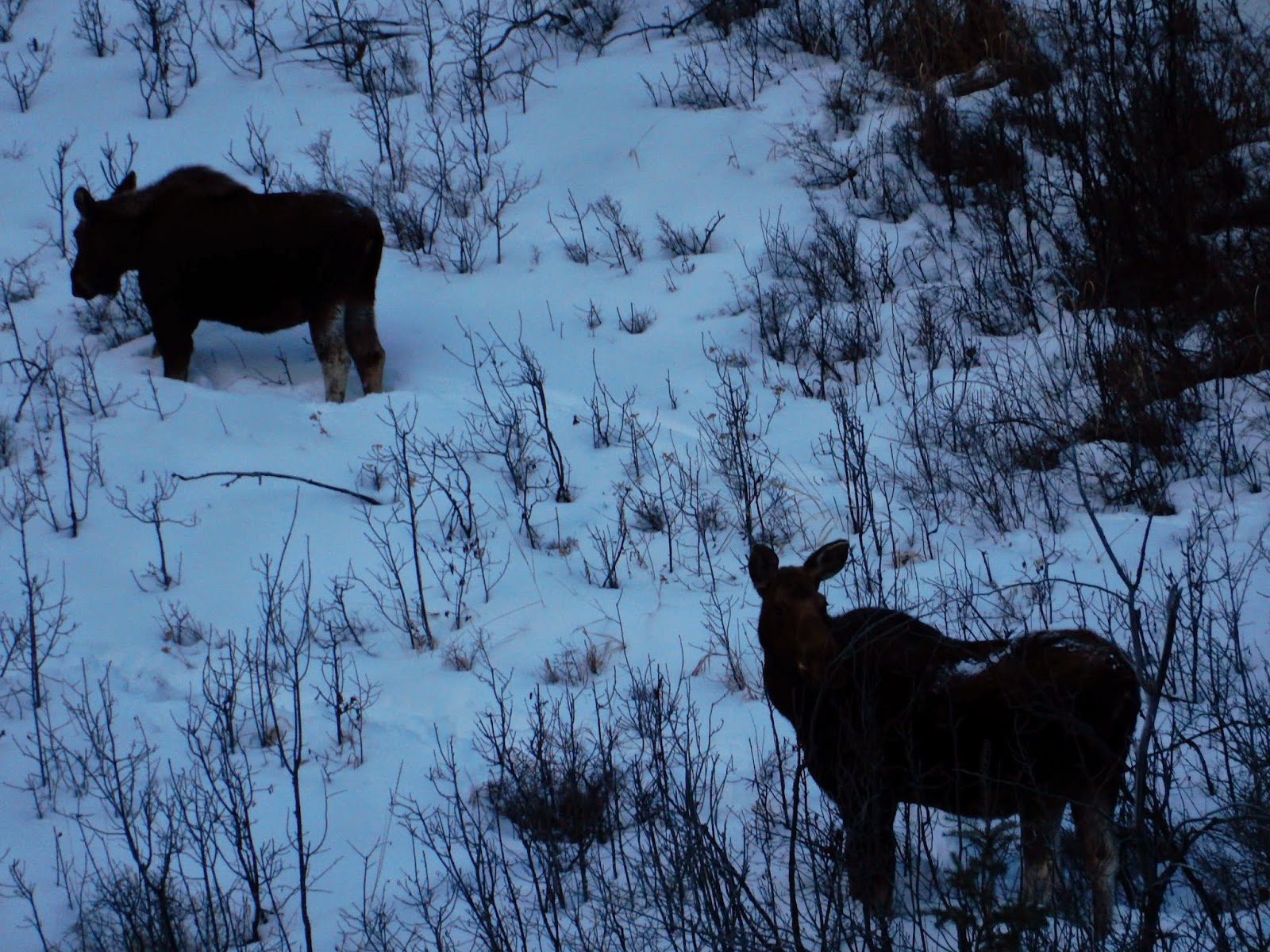 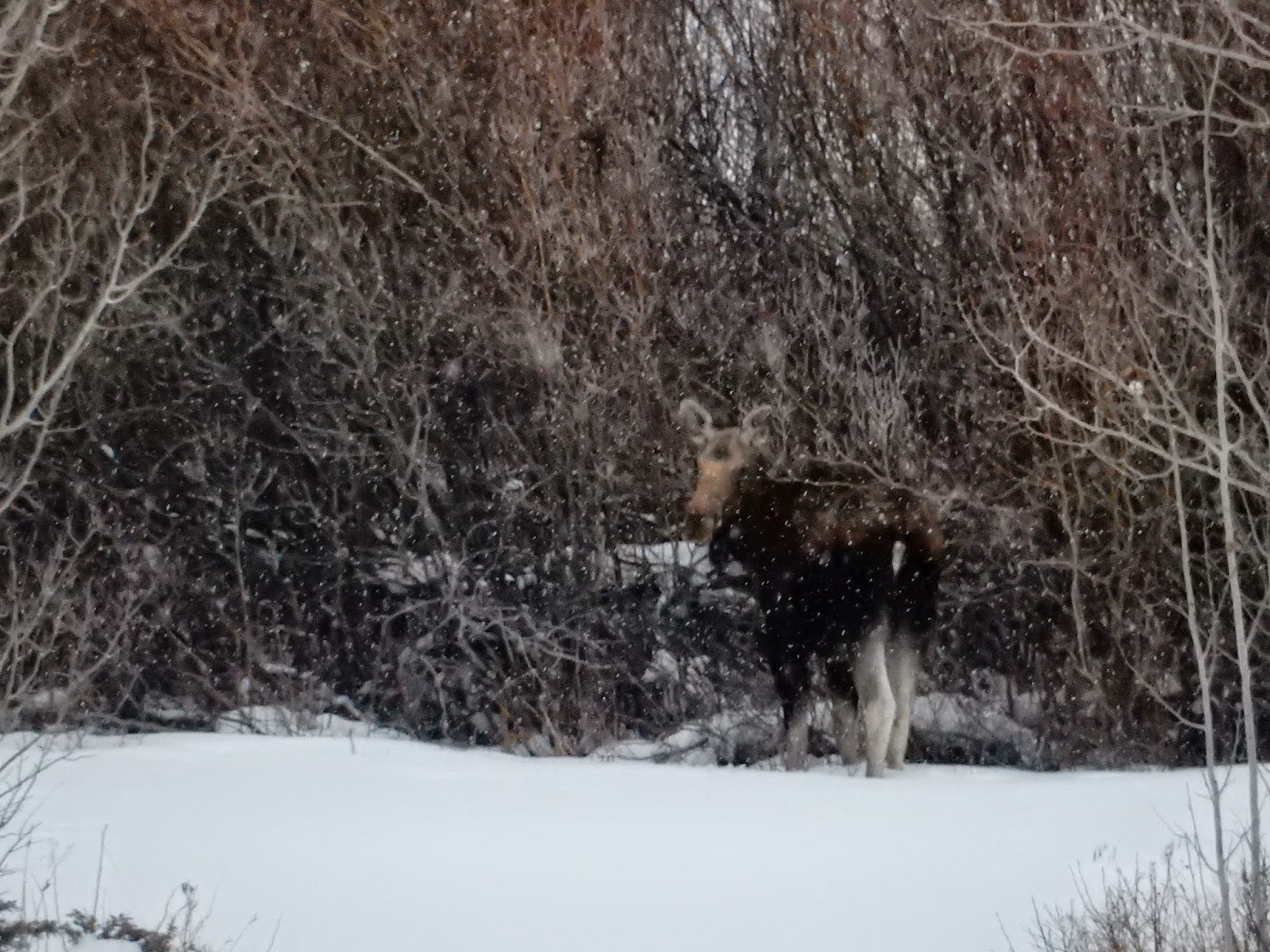 Then yesterday while cleaning up the dining room, I glanced down at the lake and saw two brown spots way out on the ice.  Two brown spots where there have never been brown spots before on pristine whiteness sticks out!  So I dropped the broom, grabbed the binoculars, and saw two fox.  Well, to tell the truth I didn’t stop to figure out what kinds of canines I was seeing before I dashed up the stairs to let Jake see. (“Dashed” may be a stretch, but go with it.)  I quickly handed the binoculars to Jake, exclaiming “look at what’s on the lake!”  “Hey, a couple of fox…good spot, baby!” was my reward.  Jake and I play this game all the time…who can spot an animal first…and he usually wins.  Not today, buddy…not today. 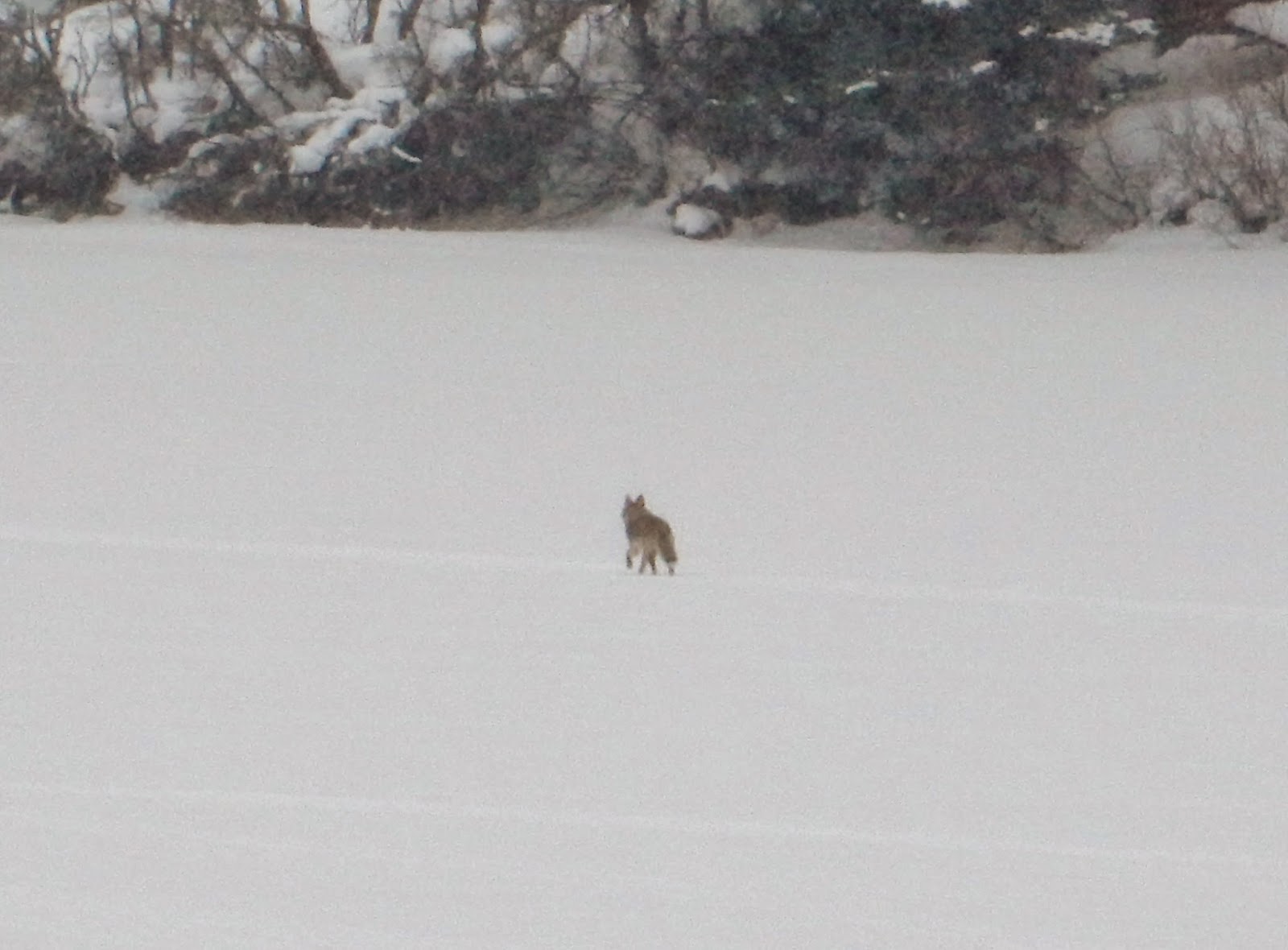 On days when I get overwhelmed by the decision Jake and I made to purchase Elk Lake Resort, I remind myself how blessed we really are to be HERE having the experiences so few have the opportunity to enjoy.  I did my time tethered to a phone in an office.  Jake did his time working in the elements building other people’s dreams.  Now we are on this adventure and the moose and fox are part of our reward.  I guess it’s all about balance and taking one day at a time.
Perhaps the last paragraph is leaving you scratching your heads…what?  Overwhelmed by Elk Lake?  But it’s such a dream come true!  Okay, let me give you another example of a day in our life at Elk Lake.

Winter is the season that the Resort really turns into a lunch destination for the snowmobile crowd.  That means lots of burgers, chicken, and bacon cooked over the grill.  When the grill goes down, the lunch crowd doesn’t get fed.  As you can guess, that’s what happened.  I don’t know how old the grill was, but I do know it had seen a lot of use even just over the two summers Jake and I worked here and certainly since we took over this past June.  It was bound to happen at some point, but why…oh why…now??


First things first.  Jake got on the phone and called up to Bozeman to see if anyone even still had grills in stock.  Luckily Home Depot still had a few and the rep was able to walk Jake through which models he had which might suit our needs. They had one, a KitchenAid 4-burner, larger than the one that died on us (important) and quality enough that it would last more than a few seasons.  Yeah!


This past Tuesday saw Jake up early to make the trek to Bozeman, first 17 miles of snowmobiling to the truck, then another two hours to Bozeman.
Then the same in reverse.  It’s a long trip, made even longer when you have to do it alone.  He arrived home mid-afternoon, towing a big 100 lb.  box of grill and one large cooler full of provisions.  After unpacking and storing the food, we rolled up our sleeves and started assembling.  What was supposed to take 20 minutes took us four hours.  And that’s not even the head-shaking part.
They had loaded the wrong grill.

Yes, you read correctly.  As we unpacked miles of cardboard, plastic, and parts, we quickly discovered that the main front of our four-burner grill had only three knobs.  Hmmm.  Our eyes wide (especially Jake’s), we went back to the big box and looked at the picture on the front.  Sure enough, three knobs…and the words, “Three Burner Grill.”  Aaarrrggghhh! In essence, we just paid $500 for a grill we didn’t want, had to use, and couldn’t take back.  (But it sure is pretty.) 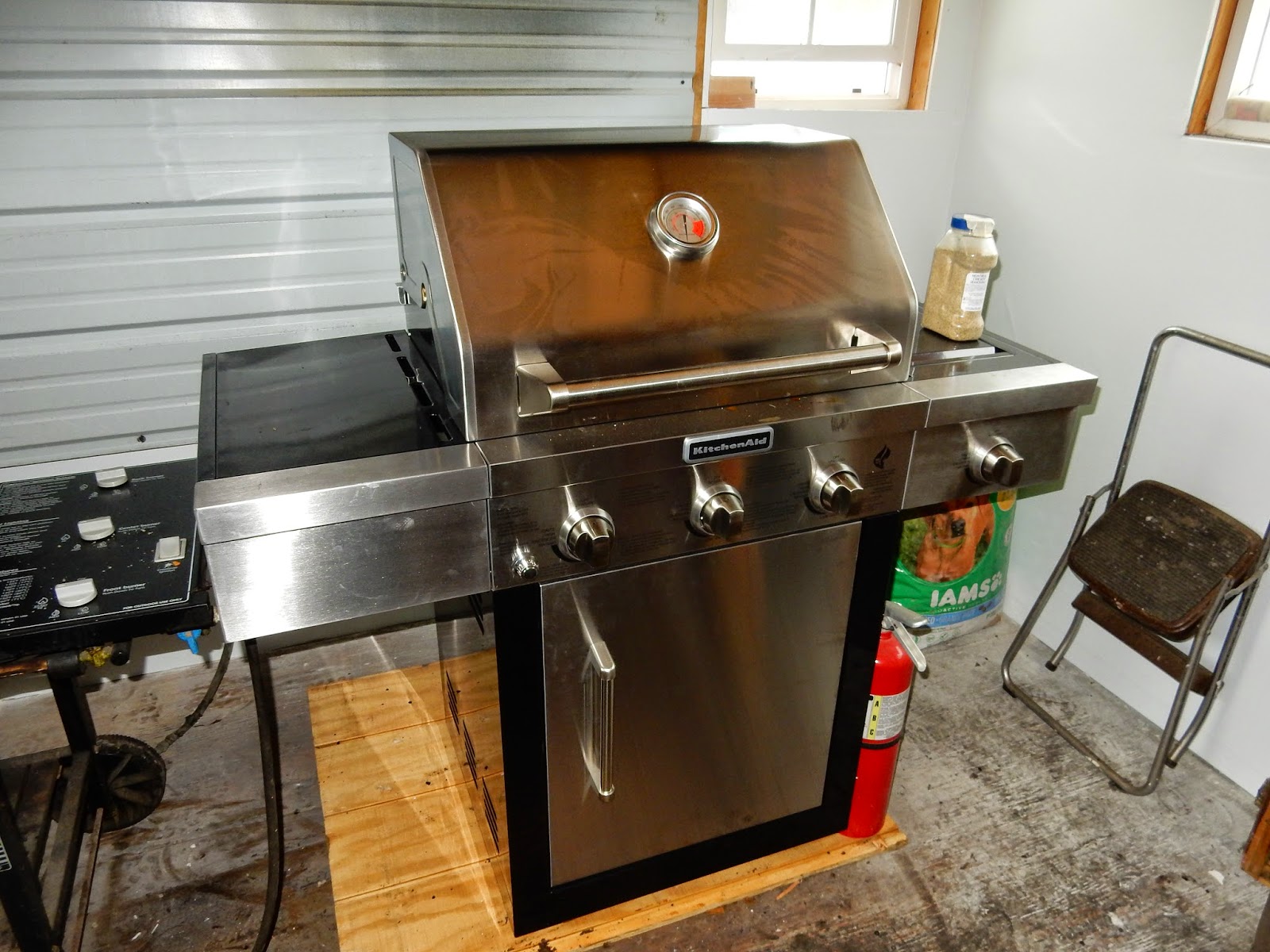 The next day Jake called Home Depot and expressed his frustration and disappointment in the whole situation.  TO THEIR CREDIT, out-of-the-gate Home Depot offered to 1.) take back the used grill in the spring when we can easily make the trip and swap it out for the bigger 4-burner model for no additional cost, or 2.) sell us the 4-burner for the price of the three-burner even if we decide to keep the smaller one.  Our faith in all things good restored, we are making it work with the smaller grill and will probably just buy the larger grill in the spring.
I just read in a book a Yiddish phase I will carry with me forever.


“If you want to make God laugh, tell Him your plans.”
Posted by Laurel and Jake at 3:50 PM